In the previous post, I said that one motivation I have for holding holistic view comes from what is usually called “unity of consciousness”. Unity of consciousness refers to the fact that we experience lot of things as a whole – for example as I’m typing this, my experience is a whole – the notebook in front of me, the room around me, the noise of the fan, the sound of the cars outside, the feel of touch of my fingers on the keyboard, the emotions that I have, the taste of the coffee in my mouth – I experience everything at once, as a whole.

In most cases reductionist thinking reacts to this wholeness by assuming that we need to explain it as a “weird” property of the mental, set aside from the physical world which is taken for granted.

The sciences give us the detailed picture of how the outside world affects our sensory organs. The photons (reflected from the physical things) fall on our eyes, get focused by the lens and are directed to the retina, where they are registered by a matrix of rod and cone cells, and associated neurons. The waves in the air, produced by this or that physical phenomenon (including the rotation of the fan, the speech of people, etc…), get to our ears, affect our ear-drums which in turn excite the associated neurons, the matrix of nerve endings on our skin fire as a result of pressure and temperature, the taste buds on our tongue react with the chemical make-up of whatever is that we have put in our mouth and send signals through the nerves to the cortex, and so on…
So, the physical picture is one where we have manifold of physical things affecting our manifold of sensory organs, which in turn send their signals deeper in the brain.

What follows from this kind of picture is that somehow this manifold (affected by differentiating and  conceptual faculties we have), is synthesized in the brain into one whole conscious experience. The result is the unity of conscious experience, or as it is also called “phenomenal experience”. It is set versus the objective world outside of the body. Further, in this view as the whole experience is created somehow in the brain, our experienced body, and our brain within that body is but a part of that phenomenal experience, and thus should be distinguished from our objective, or as might be called transphenomenal body/transphenomenal brain. I took those terms from the Wolfgang Metzger paper- The Phenomenal-Perceptual Field as a Central Steering Mechanism, though I guess Kantian terms of phenomena vs. noumena could also be used. The mentioned paper also includes the following interesting picture, taken from Norbert Bischof’s first volume of the large German handbook of psychology: 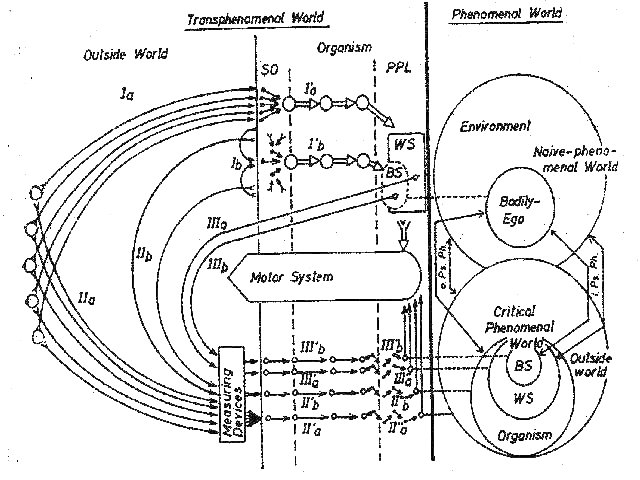 It is clear however that root of the sciences is in this phenomenal experience, in our being-in-the-(phenomenal)-world, and that the scientist approaches the phenomena in that same world in which she is, and that the scientist is basing her conclusions on the measurement results and other phenomena that she observes in that same world, including e.g. a coincidence between the pointer and lines of the scales of the measuring instrument or in modern times the read-out of different displays.

So, to sum-up, I see two possible approaches (excuse me for the oversimplification and overgeneralization):

a) Based on the sciences and their reductionism which speaks of the world in terms of small separate things, or energy in space time, or some such abstraction (where we and our bodies have dependent existence), we are inclined to postulate the phenomenal experience as a mental phenomenon, as this whole of experience is incompatible with the assumed self-subsistence of the micro-world.

If we (uncritically) take then as starting point what sciences tell us of the world, and limit ourselves to the terms of the sciences (or abstractions of the sciences), we will need to assume that all those other notions that we have, somehow emerge in the interaction of the brain and the world (as more or less nominal concepts).

It is in this view that dualism is grounded also. The dualist, not conceiving the possibility to explain all the phenomena of which we are conscious, sees as necessary to assume the existence of another type of essence (or type of properties), which added to the already present physical base are supposed to present to us the possibility of those “problematic” phenomena (e.g. qualia, consciousness, unity of
consciousness, etc..).

b) If we analyze the origins of science starting from the being-in-the-world, it appears that the sciences themselves never leave, nor have reason to leave the phenomenal experience, and that the explanations by the sciences too are never seen as leaving the so-called phenomenal world.
The being-in-the-world taken as starting point is a whole. A whole full of content of which we are more or less directly aware. Think of colors, sounds, emotions, change, agency, art, and so on. A content which is not seen as a phenomenal content created by the transphenomenal brain, but as content existing in the world in which we exist. In this view then, the unity of consciousness among with the other things – qualia, existence, change, agency, and so on, is not a problem which we need to localize in the mental space, but appears as such only if we want to start from the reductionistic picture.